Picasso said, “The meaning of life is to find your gift. The purpose of life is to give it away.” For Alexander Solomatin, CBA, of Moscow, Russia, balloon artistry is his gift, and sharing is indeed his greatest reward.

We are faced with people at the moment when they show the best side of themselves. Wishing to congratulate mom on the anniversary, or confess to someone in love, mark the end of the university, or emphasize their professional achievement, in general, at the moments of the greatest joy of their lives. This is how we share the happiness of our customers, and it's as if we spend these moments together with them, filling our lives too.

Alexander has been spreading his love of balloons for seventeen years. He and business partner, Dmitry Novikov, CBA, pictured together below, lead the Balloondog team, which consists of seven additional employees. But Alexander’s love started much earlier than the beginning of Balloondog. “When I was really little, only seven years old, my mom took me to a New Year’s show. Everything was decorated with balloons, it made a huge impression on me, I just couldn’t understand how that was done, and I was very surprised how beautiful it looked. I really wanted to learn how to work with balloons.” 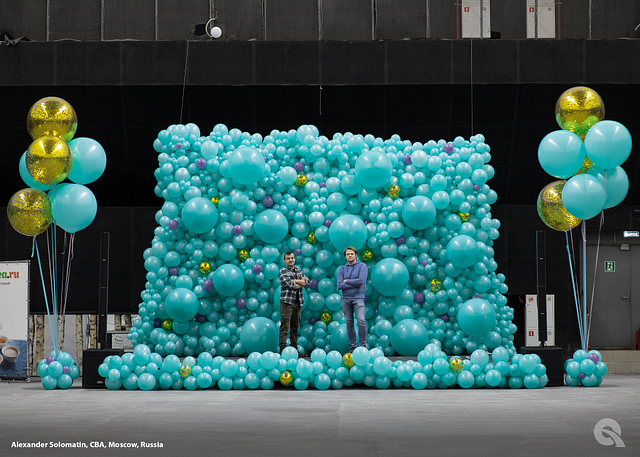 At the tender age of 13, Alexander got his chance. It seemed his balloon career was fated. “My uncle began working in a balloon decoration company. When he found out about my interest in the work, he immediately suggested me to start working in my free time. I took absolutely every job, from courier to operator of a manual printing press. This is how my long love story began…and I cannot imagine life without it!” 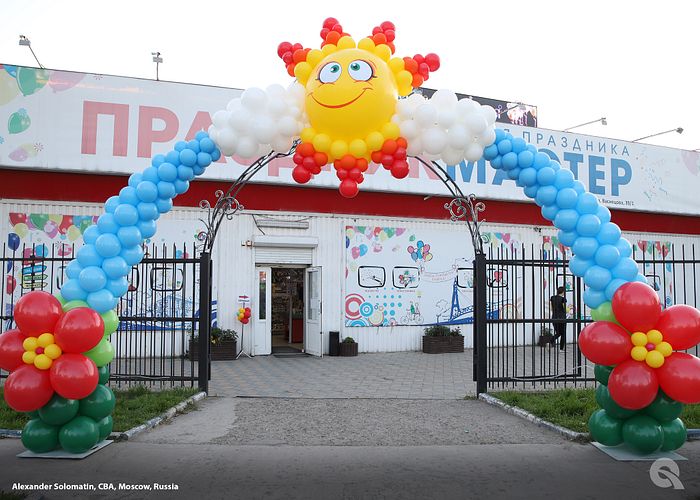 To help expand and refine his balloon skills, Alexander immediately sought education and training, an approach he recommends for any new artist. “Be sure to start by going through the QBN training program and try to pass the CBA exam as soon as possible; it's always much easier to start with a solid foundation. From my own experience, I can say that the fastest development occurs when you find yourself among like-minded people, so the sooner you start attending professional conventions and competitions, the faster you jerk ahead.” To date, he has attended more than 30 festivals, competitions, and conventions. The effort he has put forth has earned him many accolades, some of which include:

Alexander finds inspiration nearly everywhere! He admires and follows the work of many, but most especially that of Alberto Falcone, CBA. “Our biggest teacher in the world of balloons is Alberto Falcone, precisely because of his influence, our world has completely turned over, and I have forever understood that I want to deal only with balloons. That was in 2008 when Jack and Robert Lever from Balloon Express brought the incredible Italian team to the Moscow Balloon Festival, and then Alberto Falcone stood at the head. The level of that work was hundreds of times higher than what we saw and knew. In any case, we wanted to learn how to do the same, and since then, we have stood on this path. Dear teacher, if you read this, then let it be written here: THANK YOU!!!”

Today, Balloondog stays busy with both corporate and individual orders. The most significant sales occur around the New Year holiday and on February 23, which is a Russian celebration to honor all of the armed forces. Sales to celebrate Women's Day and Graduation are close behind. In the design for these occasions, you will likely find a Qualatex 6" heart—a favorite of Alexander. "I simply adore 6" hearts, and, to tell you the truth, I rarely use them in their pure form. The best way to see the potential of these balloons is twisting. After all, by changing their form, you can get an infinite number of new forms that can be used as decorative elements of shape of an advanced level of complexity."

Alexander has found that client satisfaction is the best way to market one's business. "Just do your job well and give people what they want from you and you will always be in demand." He also believes in the power of social media, particularly Instagram. "Today, whoever owns the audience owns everything. If you are not in social networks, then you simply own nothing."

Finally, Alexander’s advice for continued success has been the same since day one, “Work not with balloons, but with the emotions of people. If you do so, you’ll never be without work.”