Most of us have memories of releasing a balloon into the sky. Some believe when you release a balloon into the atmosphere, it goes up, up and up until it eventually reaches outer space and disintegrates. But of course, balloons always come back down, and they don’t magically land in a garbage bin.

Since the 1980s, activist groups have targeted balloons, especially balloon releases, claiming they are a significant cause of environmental pollution. While empirical evidence doesn’t support this, as of June 2019, five US states have laws regulating the intentional release of balloons: California, Connecticut, Florida, Tennessee, and Virginia. There are eight other state legislatures considering action: Arizona, Connecticut, Massachusetts, New Hampshire, New Jersey, New York, Rhode Island, and Maine. Some US cities have banned the sale of balloons altogether. This regulatory movement is not just happening in the United States. There are governing bodies around the world considering legislation regarding the sale and use of balloons.

It is our job as an industry to encourage the use of Smart Balloon Practices. Hyper-awareness is essential because communities around the globe are increasingly aware that released balloons eventually return as litter. It’s crucial we act now to protect our environment and the future of balloons. Toward that end, Pioneer Balloon Company and The Balloon Council have adopted official positions on the release of balloons.

Worth the Weight: Balloons Should Not Be Released

“As a leader of The Balloon Council, Pioneer Balloon Company has worked with others to implement an industry position against releasing any balloon into the environment. Don't let go: Inflate. Weight. Enjoy.” 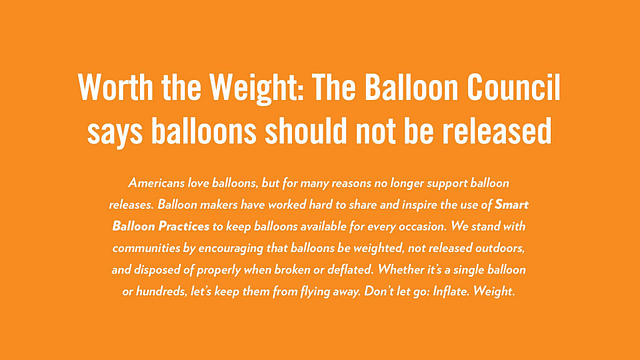 Other balloon organizations have also taken an official position on this subject. One such group is the Australian-based Pro Environment Balloon Alliance (PEBA). “PEBA supports effective changes to legislation that will ban the deliberate release of balloons to prevent littering and reduce environmental impact. We do not support the call to ban the sale and use of all balloons. Although statistically, balloons make up a very small proportion of marine debris, the industry is committed to reducing any potential impacts of balloon litter on wildlife."

There are creative alternatives that can achieve the fanfare of a balloon release. An idea catching hold in the UK is to fill a 3’ balloon with poppy seeds and take it to a field. When popped, the seeds spread throughout the area and bloom each spring for years to come. Educating customers about the issue of balloon releases and offering a list of alternative ideas will help ensure a sale while forgoing a practice that will cause harm on the industry.

Many balloons are also unintentionally released because they were not properly weighted before given to the customer. A professional balloon retailer should always securely weight all helium balloons. Educating the customer about accidental or intentional release is also recommended. This is not only a responsible practice for the environment, but also your customers. No one wants to see the face of a sad child as she watches her beloved balloon drift away!

Air-filled balloons are fantastic way to eliminate the unintentional release of balloons. While there is a definite nostalgic appeal to the traditional helium bouquet, there are many benefits to having an air-filled one. An air-filled bouquet is often more cost-effective, there is more room for creativity, and more opportunity to explore new trends.

We must all work together to protect the future of balloons. Please, always use Smart Balloon Practices, market alternatives to balloon releases, and help us keep our industry strong for years to come.

Download these free social media resources from The Balloon Council to educate your customers about the responsible use of balloons.

The Very Best Balloon Blog, Why We Should Stop Balloon Releases